“Dad, have they told you how much time you have?”

That is the question Amy asked me recently while she, Allie, and myself had a meal at a local restaurant. Before I attempt to answer that question let me rewind for just a moment and explain what has happened the last few weeks and how we had arrived at that moment, and that question.

A few months ago Amy asked me if I would be willing to do her taxes one more year. I told her that I could help her out, but that she needed to come home and bring with her all the information I would need. I also told her that she was going to sit with me and learn how to do this herself. Her taxes are so easy.

When she arrived in town we went out to eat. I never thought that I would ever have a conversation with Amy where the topics were death and taxes. More specifically my death and her taxes, but it happened. Death and taxes cannot be avoided. So they say. I am just going to try to kick it down the road a little farther. My taxes! I will send a check on April 15th.

So we first talked about her taxes. Amy changed jobs this year and so she worked most of the year in Kansas, but a small part of the year she worked in Missouri. I pointed out that she needed, or I should say we needed, or better yet let’s get down to what was really going to happen and that I needed to file state returns for her in both Kansas and Missouri. Amy looked at me and said: “Really?”  Yes little girl, really.

After taxes she had some additional finance questions. We talked about her 401k that we had set-up, and we talked about the benefits of a Roth 401k. You know it was just a regular night talking adult shit at Applebee’s. I kept my Mountain Dew intake down so not to get hopped up and go all Spider monkey on our waiter, Chip. Have you ever been kicked out of an Applebee’s? I will save that story.

Eventually the topic turned to my health. Sooner or later it always does when I am with one of the kids. You see Amy knew that I had recently had my usual tests completed and that I had seen my new doctor to review the results. After that visit the kids were told that things were going well. Amy took this opportunity to ask for more details. Damn.

What these recent results show along with the results from the past few months is that Brutus grows for awhile and then he shrinks. Shrinking is good. So for now I can continue to stay off treatments.

I shared with Amy over Mountain Dew, chicken nuggets, and fries what happened when I saw my new doctor.

Hold on a minute I know that at this point Cammy will have a question. Let me answer. Yes Cammy, I will buy you some chicken nuggets when I see you. Promise! (That boy loves his chicken nuggets.) I will take you to DQ for chicken nuggets, and a chocolate Peanut Buster Parfait!! I am feeling a little hungry right now. How about you? Okay back to the doctor.

I went over the results with the doctor, and I told him that most of the time I was feeling really good. We talked about the tumors shrinking.

I was sitting down and all of a sudden I stood up and I raised both arms into the air and I looked the doctor right in his eyes and I said to him, “I am cured!” This was a test.

You see Dr. U never liked talking about anything negative. I was hoping that U3 would be a doctor that would handle the tough times with candor. I do not want a doctor who wants to avoid the hard questions and not provide the tough answers. I was a little surprised about what happened next.

There was a moment of silence as I watched the expression on U3’s face change. I have not seen that look on a doctor’s face since Dr. U told me that I had been misdiagnosed and that my cancer was much more advanced then I had been told and that he had great concerns for my welfare or health or something like that.

U3 had that bad news look on his face. He might also have been wondering if I was a little delusional, or maybe no one had explained to me what I was up against, and now he was going to have to tell me. Or would he? That was the test. I will paraphrase what he said. Now this is very close to a direct quote, maybe a few words different.

The doctor looked at me and said: You have metastatic cancer. Your numbers could blow up tomorrow. I am glad that you are feeling well. Enjoy this while you can, because it will not last.

Now I do think that in the future I am going to have to talk to him about his word choice. That word “metastatic.” That has got to go. I do not like it. It sounds sooo bad. I am thinking that he should use the word that other doctors have used and that word being, advanced. You know you can be an advanced swimmer, advanced student, or have an advanced IQ. Which I am none of those, but I have an advanced disease. I like that better. We will talk. Moving on.

I asked the doctor if he thought I could remain off treatments for all of 2019. I asked because I already have a lot on my calendar. A couple of fishing trips, Table Rock Lake trip, baseball games, Alaska, a trip to the homeland and who knows what other opportunities will present themselves (like visiting the newest baby Heger in KC).

I guess one of them will not be a Missouri football bowl game. Damn NCAA. Maybe my anger should be directed somewhere else. Let me think about that a moment….Nope. Damn NCAA.

I really cannot think of a good time to ever go back on treatments, but especially this year. I do not want to sit on my butt at home. I want to get out and live. Looking at my schedule I do not have time to be sick.

I was looking at the doctor waiting on him to answer my questions about treatments. He did not look very comfortable. I could tell that he did not have the answer that I really wanted to hear. I guess I should not have asked such a hard question. He was having a tough time with his answer.

He looked at me and then said, “Maybe.”

We exchanged smiles. I knew what he meant. I know that he wants me to be able to cling to a little bit of hope. I will.

Before leaving the office an appointment was made for April. Then we will do this all over again. We talked about a new set of scans to be done in April. Damn.

As we go forward moving through time I know that things will change because nothing stays the same in the cancer world. They say that time marches on, but for me and people like me, our fear is that time is running out.

That brings us back to the question that Amy asked, “Dad, have they told you how much time you have?”

I have an answer to that question. The answer itself raises other questions.

I have talked to Justin and Erin in the past about Amy’s question. Justin and I have probably talked about it more in depth than I have with the girls. Amy has never really brought it up. I would imagine they have talked to each other.

They could ask Winston. Winston and I talk so he knows everything. Winston is such a good listener and is never judgmental. You can learn a lot from a dog.

Amy’s question is one of those questions where you think you might want to know the answer, but you really do not. If you do not know then you do not have to face it. The answer cannot hurt you.

I asked Amy a couple of questions to make sure she really wanted to get into this discussion. She did not. She decided that what she wanted was to think that I was going to be around for fifty more years. We left it at that. You see Amy is a lot like me. Let me explain.

I have a book sitting on my bookshelf directly behind me as I am typing. The book is titled, “Tuesdays with Morrie.” I read this book several years ago. Or rather I read most of the book several years ago. Many of you are probably familiar with the book and know that Morrie dies. I enjoyed Morrie so much as I read the book that I did not want him to die. I found myself refusing to read the ending. In my mind Morrie would stay alive. He would still be teaching life lessons. I later finished the book.

In a few months we will be entering the fourth year of my life with Brutus. When you look into what I consider to be my timeline we have gotten really deep into this process.

Erin, Justin, Amy, and Christy are the most important people in my life. They experience their own pain and have their own fears as they try to deal with what has happened and what will happen. I want to help them get through the last chapter.

Take a moment to read these words from Morrie:

Amy, when you are ready with your hard questions I have answers. Remember that we will hope for the best, but we must be prepared for the worst. It will be tough, but we will get through this together. 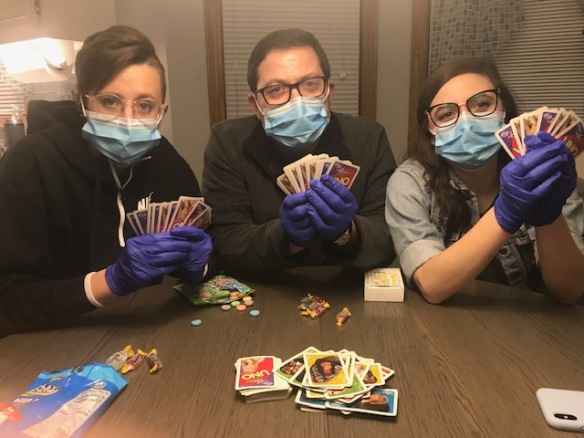 I came down with the flu recently, and while I was recovering Amy
and Allie took advantage of me not being myself and ganged up on me to
win several uno games. Good thing they were not sanctioned games.